Paul Boldt (1885-1921) is one of the unjustly neglected figures in the history of German literature. Like the Russian poet Dmitry Kedrin, whose work is also translated in Keeping Order on My Shelf by Daniel J. Webster, he published just one book of poetry in his lifetime. And, as is the case with Kedrin, the scant attention paid to his writing has occurred almost solely after his death.

Boldt was born in the town of Christfelde an der Weichsel in the countryside of West Prussia, an area which is now a part of Poland. After finishing his secondary education, he studied philology at universities in Munich, Marburg and Berlin without taking a degree. Once in Berlin, he started associating with the writers and artists who frequented the city’s many cafés and began writing poetry himself. 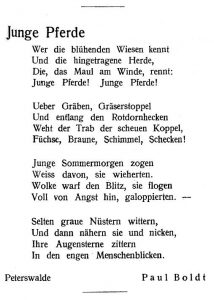 n 1912, he published his first poems in Die Aktion, a magazine most often associated with the Expressionist movement, whose better-known names among German-language poets include Gottfried Benn, Georg Heym, Georg Trakl, and Franz Werfel, the latter now remembered more as a novelist. The Expressionists, under the influence of the later works of the Swedish playwright August Strindberg, sought to portray the inner landscape of the emotions, rather than objective reality. Today, German Expressionism is probably most famous internationally through the medium of film, especially The Cabinet of Dr. Caligari.

The carnal attractions of the German capital, specifically its many prostitutes, soon became an obsession with Boldt. And they proved to be both his prime literary inspiration and the greatest enemy of his development as an artist, as he spent an unhealthy amount of time frequenting the city’s brothels. Therefore, particularly given his Expressionist leanings, many of his poems which on the face of it seem to be descriptive of nature can be interpreted as manifestations of his sexual preoccupations. 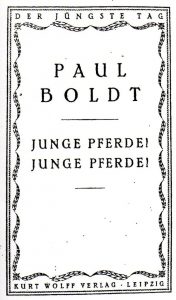 Boldt came out with the only book he published in his lifetime, Junge Pferde! Junge Pferde! (Young Horses! Young Horses!) in the year 1914. Its title-poem, “Young Horses,” is one of the very few works by Boldt that might still be found in anthologies of German poetry. This poem can be read as a rather beautiful nature lyric. He did, after all, spend his semester breaks in the West Prussian countryside where his parents lived, and would have had ample opportunity to observe the phenomena described in that poem. On the other hand, it is also easy to see these beautiful, wild creatures as metaphors for the objects of his desire. Similarly, “Nights Over Finland” could be interpreted as describing either the forbidding landscape of that Nordic nation, the often bleak cityscape of Berlin, or the poet’s own inner world. Of the three poems translated in Keeping Order, only “Spring” is blatantly sexual.

Paul Boldt was drafted into the German Army at the beginning of World War I, but was discharged in 1916 on the grounds that he was psychologically unfit to serve. He had stopped writing poetry, and died from an embolism that was a complication of surgery for a hernia. 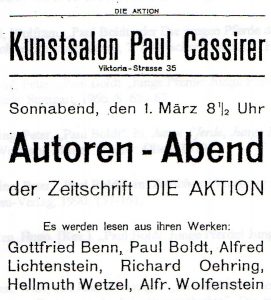 Despite his obscurity, Boldt has had a number of champions in the last few decades. In 1979, under the editorship of Wolfgang Minaty, his complete works were finally published under the title Junge Pferde! Junge Pferde!. This was the same title used by Boldt himself for his one published collection, which contained only about half of the poems that were to be eventually printed in literary magazines of the day. And finally in 2008, Martin Ebbertz republished Boldt’s original book, marking an upswing in this poet’s standing as an original and inventive writer.